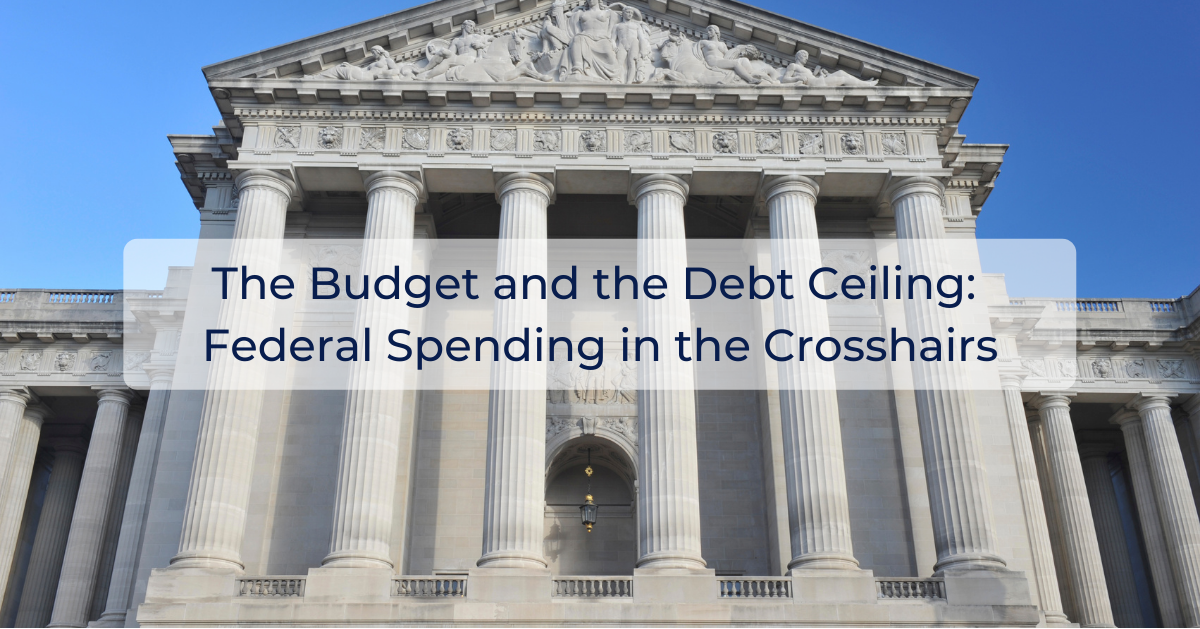 The Budget and the Debt Ceiling: Federal Spending in the Crosshairs

The Budget and the Debt Ceiling: Federal Spending in the Crosshairs

On September 30, 2021, Congress averted a potential federal government shutdown by passing a continuing resolution to provide funding for government operations through December 3, 2021.1 This was only a temporary measure, and lawmakers will continue to wrestle with the budget for fiscal year 2022, as well as the debt ceiling, which requires action by mid-October.

Both of these issues have become increasingly contentious over the past decade, and they are made especially difficult this year due to simultaneous negotiations on two large spending initiatives, the roughly $1 trillion infrastructure bill, which has bipartisan support, and the $3.5 trillion budget package funding education, climate initiatives, and health care, which is split along party lines.

The budget and the debt ceiling are often considered together by Congress — and they both must be addressed to maintain government operations — but they are separate fiscal issues.

The federal fiscal year begins on October 1, and under normal procedures 12 appropriations bills for various government sectors should be passed by that date to fund activities ranging from defense and national park operations to food safety and salaries for federal employees.2 These appropriations for discretionary spending account for about one-third of federal spending, with the other two-thirds, including Social Security and Medicare, prescribed by law.3

Although it would be better for federal agencies to know their operating budgets at the beginning of the fiscal year, the deadline to pass all 12 appropriations bills has not been met since FY 1997.4 This year, none of the bills had  passed as of September 30.5

In order to buy time for further budget negotiations, Congress typically passes a continuing resolution, which extends federal spending to a specific date based on a fixed formula, generally at or based on the same level as the previous year. The continuing resolution of September 30 extended spending at FY 2021 levels. The bill also provided additional funding for disaster relief to help Americans affected by storms and wildfires, and funds to process and settle Afghan refugees.6 Adding to the stakes of this year's budget negotiations, spending caps on discretionary spending that were enacted in 2011 expired on September 30, 2021, so FY 2022 spending may become the baseline for future spending.7

The Debt Ceiling: A Stop Sign for Federal Borrowing

The debt ceiling refers to a statutory limit for federal government debt, essentially a stop sign for federal borrowing. When the ceiling is reached, the Treasury can no longer issue securities — such as Treasury notes, bills, and bonds — that would put the government above the limit. (It may issue new securities to replace redeemed securities.)

Until 2013, lawmakers regularly increased the debt ceiling in response to budget requirements, often with little or no conflict (although the 2011 negotiations were extremely acrimonious). Since that time, Congress has suspended the limit when necessary to allow unlimited borrowing for a specified period of time. 8

The current debt ceiling predicament began when a two-year suspension of the limit expired on August 1 of this year. At that time, the federal debt was about $28.4 trillion, with large recent increases due to the $3 trillion  pandemic stimulus passed with bipartisan support in 2020, as well as the 2021 American Rescue Plan and continuing effects of the 2017 tax cuts.9–10

Beginning in August, the Treasury has used extraordinary measures to maintain cash flow. These include suspending issuance of special securities to state and local governments, suspending investments in federal employee pension funds, and redeeming Treasury securities held by the funds earlier than normal. (By law, the pension funds must be made whole with interest after the debt limit is raised.)

On September 28, Treasury Secretary Janet Yellen informed Congress that the extraordinary measures would soon be exhausted, and the government would be unable to pay all of its bills if Congress does not raise the debt ceiling by October 18. If this should happen, the Federal Reserve has a contingency plan using unprecedented measures that might mitigate the effects of a short-term default, but Fed Chair Jerome Powell said that the Fed didn't want to publicize the plans because it didn't want to create a "misunderstanding on the part of the public that we could actually shield the financial markets, and the economy, and the American people from the consequences of default."11

The consequences of a U.S. government default could include unpaid bills, higher interest rates, and a loss of faith in U.S. government securities that would reverberate throughout the global economy. Given the stakes, it is unlikely Congress will allow it to happen. However, even the potential for default has caused investors to demand higher yields for short-term Treasury securities, which has contributed to stock market volatility.12 This effect has been relatively minor through the end of September, and multiple other factors are driving bond yields and stirring the market.13 If the impasse drags on to the last minute, as it did in 2011, the impact on the markets could be more serious.14

The Hurdle: Bridging the Political Divide

Although leaders on both sides of the aisle agree that the debt ceiling should be raised, there is disagreement over how it should be accomplished. On September 28, an effort to suspend the limit with a simple majority vote was blocked in the Senate, where the filibuster rule effectively requires 60 votes to end debate and advance most legislation forward for a vote.15 The following day, the House voted to suspend the debt ceiling until December 2022, but the measure was expected to fail in the Senate.16

If Congress is unable to raise the debt limit through a "clean bill," one possibility may be to attach it to the education, climate, and health-care package, which is slated to move through a complex process called budget reconciliation that allows a bill to bypass the Senate filibuster. However, the reconciliation process is time-consuming, and it is not clear whether the debt ceiling would meet parliamentary requirements.17

Although the debt ceiling is a serious issue, Congress has always found a way to resolve it in the past. Any market volatility due to the uncertainty may settle down once the issue is resolved, but of course the market will continue to react to other forces. It's generally wise to maintain a long-term investment strategy based on your personal goals, time frame, and risk tolerance, rather than overreacting to political conflict and any resulting market volatility.

U.S. Treasury securities are guaranteed by the federal government as to the timely payment of principal and interest. The principal value of Treasury securities fluctuates with market conditions. If not held to maturity, they could be worth more or less than the original amount paid. All investments are subject to market fluctuation, risk, and loss of principal. When sold, investments may be worth more or less than their original cost.